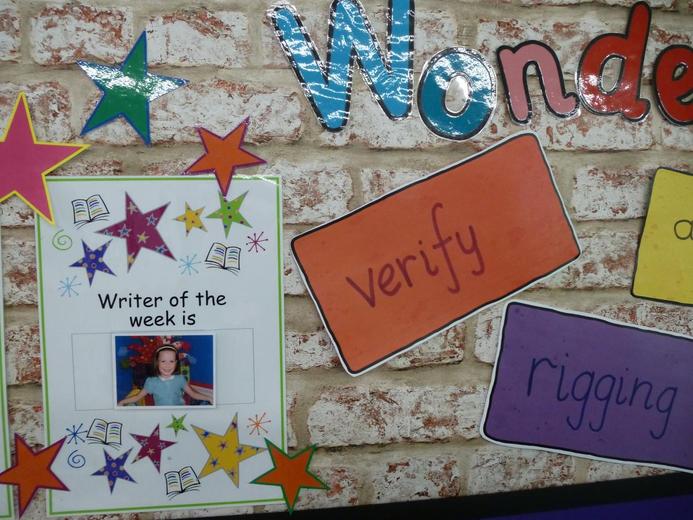 I feel so proud when I get a special award. I love to show my special badge to my friends ~ Pupil Comment.

Headteacher’s awards are given to children by the class teacher if they regard their work or behaviour to be outstanding for that individual.

Exceptional work can be rewarded with a Star of the Week sticker and pencil which is also recorded in the Celebrating Success folder.

At the end of the term children who have been successful in achieving a Headteacher’s Award will have a letter sent home informing their parents/guardians of their achievements.

These school awards are available to children from Reception to Year 6.

Reader of the Week ~ Special recognition for an achievement in reading progress.

Writer of the Week ~ Special recognition for an achievement in writing progress.

Word of the Week ~ Special recognition for an interesting or ambitious word found by the child and it's meaning explained to the class.

Bronze Award in Reception ~ Awarded when children use a pencil and hold it effectively to form recognisable letters, most of which are correctly formed.

Silver Award in Year One ~ Awarded when children can form all lower case , upper case and digits 0-9 correctly.

Gold Award in Year Two ~ Awarded when children can form all lower case letters of the correct size and relative to each other. Start using some of the diagonal and horizontal strokes needed to join letters and understand which letters are unjoined. Write capital letters and digits of the correct size, orientation and relationship to one another and lower case letters. Use spacing between words that reflects the size of the letters.

Pen Licence ~ Awarded when children write with increasing legibility and their handwriting is consistent and high quality.

These school awards are available to children from Year 1 to Year 6.

Every Friday the will complete a weekly spelling test. Stars will be awarded for the following:

Bronze star ~ Having a good try.

These school awards are available to children from Reception to Year 6.

Maths Wizard ~ Special recognition for an achievement in mathematics progress.

Timetables certificates ~ Reward when specific tables are known off by heart.

Unfortunately not the ones with chocolate chips.

Some cookies are necessary in order to make this website function correctly. These are set by default and whilst you can block or delete them by changing your browser settings, some functionality such as being able to log in to the website will not work if you do this. The necessary cookies set on this website are as follows:

Cookies that are not necessary to make the website work, but which enable additional functionality, can also be set. By default these cookies are disabled, but you can choose to enable them below: